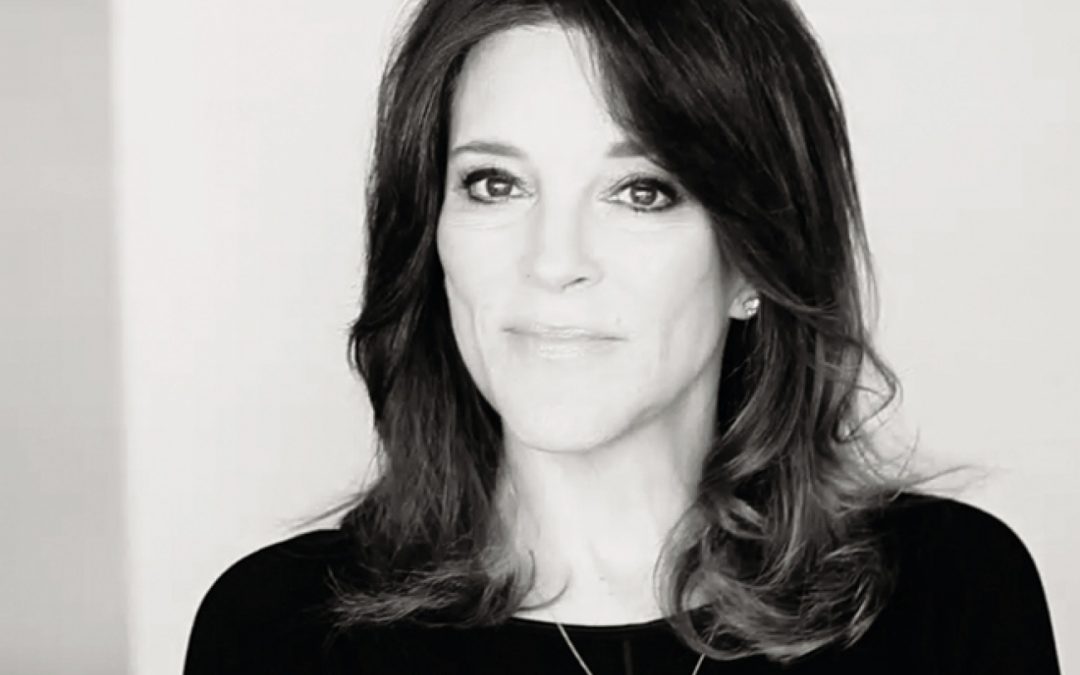 October 2013 was when Marianne Williamson announced she was running for Congress, and October 1985 was when I first met her. In the span of almost 30 years I’ve been influenced by someone I don’t know personally, but who had a profound impact on my life experience. It takes putting some years on a life to truly see how far you’ve come. What I know now and didn’t know then is that even though I thought I had it all figured out, God had a bigger plan and beautifully orchestrated the signs to keep me on course.

I thought the Divine was outside of my life, when it was actually within and inspired me to come face to face with my fears and break open my heart – something we are all capable of when willing to look in the shadows of our own darkness. Marianne’s words were the bridge from unknown loving Grace to the Master-in-the-Making of my own life. Unbeknownst to me, it was loving Grace which started to pierce my heart at eighteen when I moved to Los Angeles from the small town of La Jolla, seeking something bigger and better beyond…

Like Marianne, my Mother was a faithful follower of A Course in Miracles in our home when I was growing up. Even though I honored her process, I wasn’t personally connected with it and couldn’t wait to spread my wings by creating comfort in a new home of my own. I was naively unaware of the discomfort to follow. That time in my life, although hidden from view until years later, would become the defining moment of home residing in my heart, and it was Marianne’s wisdom that became the anchor to my first series of massive losses when my boyfriend committed suicide.

She spoke at a church in Hollywood and offered group meditation at local homes during the week. When I showed up, there were only fifteen of us gathered and that night broke open my wounded heart to let more love in. Marianne started the meditation with, “Imagine a golden ball of light…” The beauty of those words became a bookend to the grief and recovery I would endure and many years later finally understand as my purpose in life.

We all have our unique parts to play in the production of life and it’s the moments of choosing love over hate, and light over dark that give us access to a life far greater than we ever imagined. I don’t remember the home we gathered in that night, nor do I remember anyone attending, but I have never forgotten the space of loving grace we all collectively connected with. I’m forever grateful that Marianne Williamson is someone who gave me the courage to open my heart wider by letting that golden ball of light shine brighter through me.

She is running for congress and it’s the next logical place for her to step into. I share with you an opportunity to give her words a bigger platform to speak from. She is the Grace that is needed in our dying democracy and whatever the outcome of this election, she will continue to shine brightly in the places God is calling her to show up for. Her Create Anew Campaign states,

If you want to transform your life, you can’t just transform some things. You can’t try to fix some issues, but sweep others under the rug because it’s too hard to face them. And the same is true for a nation. Countries have shadows just like individuals do. You can’t change your life just by looking at the fun things, and you can’t change your country just by looking at the fun things either. It’s hard to face what we don’t want to face sometimes. But once we do, the healing can begin.

The message she delivers will surpass any political boundaries we try to define. We are all One regardless, and I support any campaign that allows more light to reach the darker places of nations and humanity as a whole.

As Always, Ignite Your Light and Let it Shine Bright!